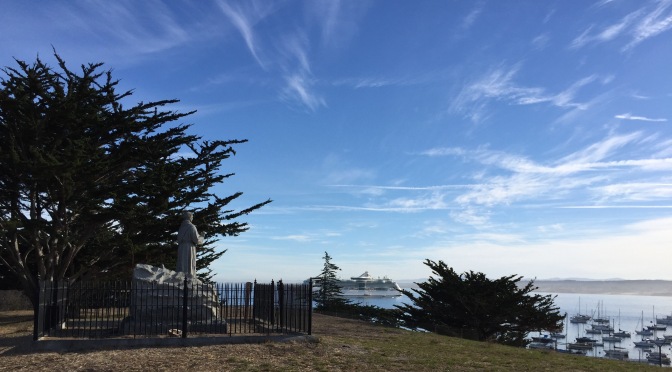 Old Monterey Foundation continues to team up with noted Monterey Bay historian and author, Tim Thomas, who offers outstanding “Lower Presidio Historic Park Walking Tours” on the third Saturday of every month from 10:00 AM – Noon.

The El Castillo de Monterey was a Spanish fort constructed in 1792 to protect the port and presidio from invaders. It is one of only 3 such forts constructed by the Spanish in California.

The fort began in 1792 as a crude log parapet with eleven cannons behind it. The cannons were probably brought from the nearby Spanish Presidio of Monterey. The site was on present day Presidio Hill on a flat plain at the 60′ level overlooking the Monterey Harbor.

In 1796, the Castillo was strengthened by adding a new earthen revetment on the seaward side. The improvements included an adobe supported wooden gun platform, casemates and a wooden barracks for the artillery troops. These improvements still did not make the Castillo a sufficient fortification and visitors to the area generally derided its capabilities.

The first test of the Castillo came on November 20, 1818 when Argentine pirate Hippolyte Bouchard attacked Monterey. He failed in a direct attack on the town and decided to land a force on Point Pinos from which they first attacked the Castillo and routed the defenders. They turned the guns on the town and then attacked it, overwhelming the defenders who fled. The pirates end up sacking the town, destroying the Castillo’s cannons and structures. They set fire to the town before they left. 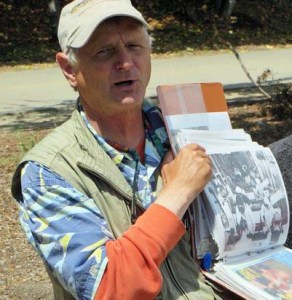 Tim Thomas, fourth-generation native of the Monterey area, is a popular speaker and lively tour guide. For 16 years, he was historian and curator for the Monterey Maritime & History Museum and has worked with the Monterey Bay Aquarium, California State Parks and the Monterey Bay National Marine Sanctuary. He is author of “The Abalone King of Monterey: ‘Pop’ Ernest Doelter,” “The Japanese on the Monterey Peninsula” and co-author of “Monterey’s Waterfront.” Tim also conducts monthly “Wharf Walks” on Monterey’s Old Fisherman’s Wharf and offers Cannery Row walking tours, as well.

About the Lower Presidio Historic Park

The Lower Presidio Historic Park, described as “The Most Historically Significant Site on the West Coast” and “One of the Most Beautiful Places in Monterey” is on its way to becoming a true historic public park to be enjoyed by locals and visitors. Old Monterey Foundation, in cooperation with the City of Monterey and Department of the Army, has raised initial funds to begin Phase One of the project to enhance and restore this historic 25.3-acre site and is now seeking public donations to help complete the project. Old Monterey Foundation invites everyone to become members of “Friends of the Lower Presidio” at www.oldmontereyfoundation.org and make tax-deductible donations to more quickly restore the park.

The Lower Presidio Historic Park is one of the least-visited historic parks in the area due to some confusion about whether the public is allowed in the area.  Situated in a “hidden in plain sight” location, the park features spectacular views of the Monterey Bay and Harbor and will become a jewel of the City of Monterey’s park system.

With the help of donations and grants, Phase One of the project will give the Lower Presidio Historic Park the look and feel of an historic public park, including improved way-finding and identification entry signs to assist the public in accessing the site and highlighting several of the important historic periods at the Presidio; development of pathways, benches and interpretive signs and monuments on the site; replacement of the old cyclone perimeter fence with a wood-appearing historically accurate fence, minimal branch/tree removal where necessary to assure views of the Monterey Harbor and restore it to the way it was seen historically; and development of an ADA approved path leading to the Sloat Monument, the highest point of the site.  Old Monterey Foundation is now also seeking funds to restore the Father Serra statue that was recently vandalized.

Eric Palmer and Anne McGrath of the City of Monterey Outreach Office recently completed an informative short video about the Lower Presidio Historic Park and its significance to California and American history:  https://youtu.be/Lg7X0spnC4k

Why is the Lower Presidio Historic Park considered by many professional historians as “The Most Historically Significant Site on the West Coast”?

There are many major historic highlights of this site that Tim Thomas will discuss in depth over the coming months which include:

About the Presidio Museum of Monterey

The Presidio Museum of Monterey, also located on the site and operated by the City of Monterey, is an excellent place to currently view exhibits, artifacts, and videos that lead visitors through Monterey’s various stages of military development from the indigenous period which highlights the area’s native populations; through the Spanish and Mexican periods; and up to present day.

This centrally located site has tremendous potential for all park-goers. It can be a first stop for any visitor to the Monterey Peninsula with its gorgeous views, perfect for their photos and memories of the area. It is a great destination for simply relaxing, walking, running, biking, hiking, playing disc golf, touch football, doing yoga and other exercise, enjoying picnics with family or friends, meeting for reunions and it is even a unique place for wedding proposals. Artists and photographers will find it a wonderful site for their work and many other target groups will be invited to visit. Students can come to the park as well as any visitor to the area who wants to learn more about California history.

Currently, it can be visited at any time of day but it is important to pack in and out any food or items brought to the site. If desired, visitors may choose to bring a chair or small table for a lunch or dinner with an extraordinary view. Ultimately, when Phase One of the project is concluded, there will be benches, tables and trash receptacles.