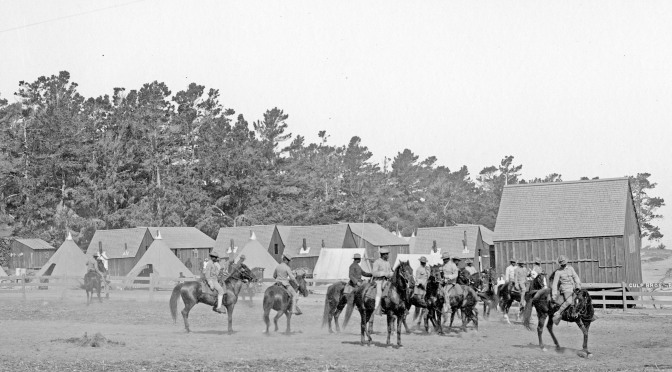 For the fourth year, Old Monterey Foundation is pleased to announce that will hold the first free event in the 2017 Lecture Series sponsored by The Marcia F. Devoe Fund of the Community Foundation for Monterey County on Thursday, August 10, 2017 from 6:00 p.m. to 7:30 p.m. in Irvine Auditorium, McCone Building, Middlebury Institute of International Studies at Monterey, 499 Pierce Street, Monterey.

What: Focus on the Historic Buffalo Soldier Trail

This presentation will shed light on the little known and mostly forgotten Monterey leg of California’s Historic Buffalo Soldier Trail.  Prior to 1916, the Army was responsible for stewardship of the National Parks, including Yosemite National Park.

In 1901, the Presidio at Monterey post including what is now the Lower Presidio Historic Park, was reopened by the Army as a cavalry and artillery garrison. Among its first units was the legendary 9th Cavalry, the “Buffalo Soldiers,” who were African-Americans.

The presentation will also show 1904 articles published by area newspapers along the Trail and will provide the information about and names of the troop members who were garrisoned at the Presidio of Monterey who traveled to Yosemite and back.

Geneva Brett is a Los Banos Real Estate Broker and ten year advocate for California’s Historic Buffalo Soldier Trail.  In 2010, she testified before a Congressional Sub Committee in support of the Buffalo Soldiers in the National Parks Study Act, which has since become law.

Following the lecture, Bill Wojtkowski, President of the Old Monterey Foundation Board of Directors, will present a short overview of improvements planned for the Lower Presidio Historic Park.

This lecture is suitable for ages 9 and up.

The lectures are very popular so attendees are urged to come early to secure a seat.

The second lecture in the series will take place on August 24th: “Ninety Years of Key Decisions to Preserve Monterey’s History” with presenters Kip Hudson and Mary Wright. Monterey, described as California’s most historic city, has been preserved through the impassioned efforts of its surrounding community.  Individuals, organizations and governments have all played a role in its preservation.  Join us for this discussion by community leaders who have participated in many of these achievements and challenges. Finally, a brief overview of the future of Monterey History and Art Association will be provided by the President of the organization, Larry Chavez.

About the Lower Presidio Historic Park