During the night of October 14 -15, 2015, unknown criminals entered the fenced off Father Serra enclosure at the Lower Presidio Historic Park and removed the sculptured head of the Father Junipero Serra Statue.  Presumably a sledge hammer was employed to remove the head, which is  now missing after a search of the surrounding area.  Given the recent publicity for the canonization of Father Serra, this appears to have been a juvenile political statement from one or more persons against the sainthood.

The statue was originally erected by Leland Stanford’s wife, Jane, in 1891, and is one of two elements at the Park which have earned a place on the National Registry of Historic Places. 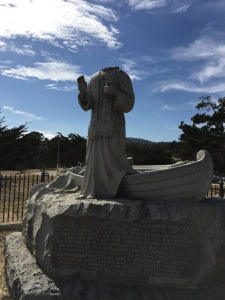 No one has come forward to accept responsibility for the vandalism and attack on our history.  Emails received strongly suggest that the defacement was the product of misinformed zealots who choose to interpret their own history without regard to the facts.  And of course the timing coincides with the recent canonization of Fr Serra by the Pope.  For more on the history and the controversy surrounding Fr Serra, go to:

The City of Monterey is responsible for the Statue under the terms of the lease under which the City holds the Park property.  The Old Monterey Foundation has volunteered to help the City in any way possible to raise funds and assist in the restoration of the Statue, which should hereafter be covered by security measures such as CCTV.

For more on the story, go to: